Local employers from East Anglia were recently invited to visit Sennelager Training Centre in Germany to experience Army Life with their Reservist employees.

More than 80 Reservists from 158 Regiment Royal Logistic Corps were on their two week Annual Training Camp, Exercise Leopard Star, which takes place annually in different locations but this year, was held in Germany.

As part of an initiative by East Anglia RFCA Employer Engagement team, employers had the opportunity to join their employees on the exercise to gain a better understanding of the work undertaken as a Reservist when they are absent from the workplace and to see the skills that have become valuable in the civilian employment.

The five local employers who were invited to the experience were from Royal Mail, BGL Group, Ipswich Hospital and Weatherspoons and all had the chance to witness the work of a Reservist.

Basil Hirniak, a manager with the Royal Mail in Bedford, whose employee was Sgt Rick Croot, commented: “The Post Office has a National policy in that we totally support our Reserves and recognise the real benefits they bring to the workplace and obviously try where we can to utilise these skills. These last few days have been very interesting and informative.”

During the trip, employers had the chance to practice some Reservists’ tasks including Range Shooting and numerous field exercises such as cooking their own meals and night drives. 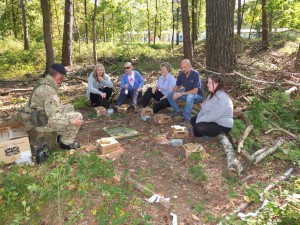 Commanding Officer of 158 Regiment, Lieutenant Colonel Mike Hughes said: “As we enter into a period of contingency operations, the aim of this exercise is for us to ensure that our soldiers are properly prepared and trained to a standard, confident in the knowledge that we can hand them to our paired Regiment (7 Regiment, RLC) knowing they will be able to undertake any task asked of them.”

Sennelager is a village in Germany that forms part of the City of Paderborn. It is notable for its association with the military since the 19th century. It is now the location of a British Army barracks, where the 20th (United Kingdom) Armoured Brigade is currently based.

Want to Show your Support?
Now more than ever, the Reserve Forces are an integral and vital part of the UK’s Armed Forces. The support of their employer is essential to enable them to undergo training to achieve the high standards of professionalism required. If you would like to show your support or for more information on our Employer Engagement team visit our website.

See a video of the trip here.
Photo Gallery