The Royal Norfolk Show hosted a huge military presence this year from both the Regular and Reserve Forces and East Anglia RFCA who were visited by the professional head of the British Army, Chief of the General Staff (CGS) General Sir Nicholas Carter to witness for himself the vital role they play in supporting the relationships between the Military and Civilian communities in the region. 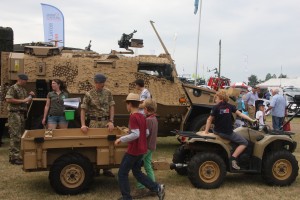 Chief Executive of East Anglia RFCA, Colonel Ray Wilkinson said, “We are extremely grateful to the Chief of the General Staff for visiting us. It’s not every day that the professional Head of the British Army devotes so much of his time to a single regional activity. Sir Nick’s keenness to engage with the civil and business community within East Anglia, as well as to give his personal support to its Reserve Forces and Cadets Association (RFCA) is a sign of the importance the Army attaches to engaging with the nation at all levels.”
Before taking part in a Q&A session, Sir Nick gave an opening statement where he highlighted the importance of the Reserve Forces and imperative work of the RFCA’s he said;
“It is really important that I try and maximise the available military strength that I have in the country and that’s why the Army’s Reserve is really important to me, it is also why it is important that I regularly support all of the RFCA’s around the country. This being my first visit to the East Anglia RFCA, I am here to support it because it provides an abs 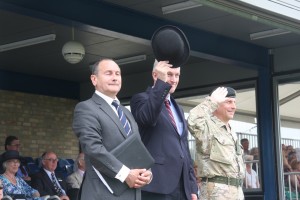 olute important linkage between what I am trying to achieve with the institution and what happens locally on the ground and with employers.

Norfolk Councillor, Hilary Cox asked a question about how the county could widen its engagement with the Cadet Forces, Sir Nick emphasised the importance of the Cadet Force Adult and the need to “obtain high-quality adult instructors” in order to keep the Cadet Youth organisations going. He said, “The role of the Adult Instructors has become much more challenging… People who are prepared to put themselves forward to become an Adult Instructor have got to be people who are ready for a significant, but stimulating challenge” 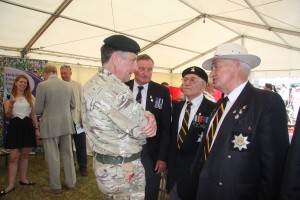 Once the Q&A session had finished, Sir Nick visited the Military Zone which was buzzing with excited and curious people getting a closer look at the Military vehicles. Sir Nick discovered a whole raft of Military personnel interacting and engaging with the public and had the chance to speak with Reservists and Regulars.

At the Grand Ring Sir Nick was treated to the fabulous Musical Ride of the Household Cavalry before taking the final salute. His final visit was to the Veterans Stand where he was met by Group Captain Stewart Blackburn, Chairman of Veterans Norfolk who delved a little deeper into how they offer support to the Armed Forces community.