Captain Roger Waldman joined Cambridgeshire Army Cadet Force ACF at the age of 14 as a small cadet not knowing that for the next 51 years he would progress through the ranks and remain with the County Cadet Force.

It’s some achievement to serve with one of the Nation’s Youth Organisations, maintain a civilian job and deal with a family life outside the Cadet Force. You could say he deserves a medal; in fact a Cadet Force Medal and five bars. On top of this goes an Army Cadet Force Certificate of Good Service awarded to those giving exemplary service. 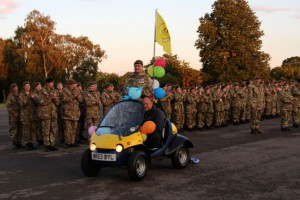 Roger joined as a Cadet at Melbourne Detachment. He soon gained promotion to Cadet Sgt before applying to join as an Adult Instructor at the age of 18 years. Having been accepted he was posted to initially to Hauxton Detachment and then to Sawston Detachment. He again progressed through the ranks to become Regimental Sgt Major (RSM) for the 4th Battalion, Cambridgeshire Army Cadet Force.

Promotion to a Commissioned Officer soon followed, along with a change of job role, by moving to the post of the Battalion Training Officer and then later to 2 IC (second in command) of the Battalion. 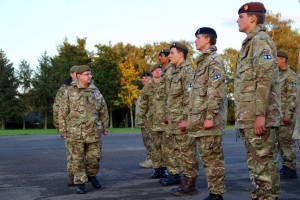 Roger has three children aged 26, 21 and 18 years old and is employed as a Distribution Assistant in Cambridge. His service with the ACF comes to an end due to reaching the age limit.

When asked to single out an event or memory Roger said: “Seeing young Cadets progress in the Army Cadet Force and mature into the young leaders. Many value their time with the ACF and take the time and trouble to keep in touch or just acknowledge you in the street. It makes it all worthwhile.”

The 2014 Annual Camp at Nesscliffe in Shropshire is Roger’s last one. The final parade seeing his 5th medal bar being presented on Parade by Colonel Stephen Martin (Cadet Commandant) in front of 400 Cadets and Adults. It’s both a proud and sad time for Roger as he proudly marches off the parade square with clapping hands and cheers from all on parade.