The event was a brilliant opportunity for guests to mingle over a complimentary drink in the 15th Century Stone Hall before moving on to the Assembly Room where the catering team of the ‘West Norfolk Flying Chef’ served an excellent three course dinner.

Among some of the guests were Mayor of King’s Lynn and West Norfolk Councillor Elizabeth Watson, Sir Michael and Lady Angela Oswald, Julian Marsham the Earl of Romney (the Squadron’s Honorary President) as well as parents and past members of both staff and cadets spanning the Squadrons 75 year history. 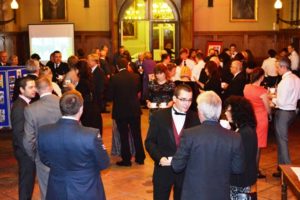 Squadron Commanding Officer Flight Lieutenant, Pauline Petch, set out the numerous activities that cadets had participated in and their achievements during her after dinner speech. Making reference to two ex cadets who were present she said:

“Last year has seen many personal successes within the cadet team including ex Cadet Warrant Officer Sam Oakes who recently left to go to Worcester University, he has now been accepted into the Birmingham Officer Training College. He also completed the 100 mile Nijmegen Marches in July for the 4th time.

Also ex Cadet Warrant Officer Ed Barrett who last April was awarded the John Cunningham Scholarship for 13 hours of flying at Tayside. He has also been awarded the De Havilland Scholarship with Bristows Helicopters. He leaves this Christmas for Florida for a year of training. Well done to them both.”

Following the speeches in true awards ceremony format, the nominations for awards were screened to the guests by staff member Flying Officer Chris Barrett with the winners stepping forward to receive their award from a distinguished guest.

The evening concluded with everyone retiring back to the Stone Hall for coffee and to eagerly see if they had won a raffle prize.