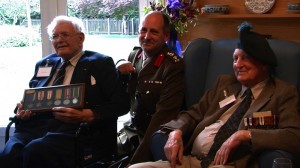 The official signing of Leases last year launched a £10m development of the Bedford Citizens Housing Association site which will include a brand new detachment building for Bedford Cadets.

Located at Kimbolton Road in Bedford, the building will officially open at 1100 hours on Saturday 17th January by HM Lord-Lieutenant Helen Nellis.

Some of the residents in the complex are retired armed forces personnel, including two from the London Irish Regiment. (pictured with The Commandant who has historical links with the regiment) 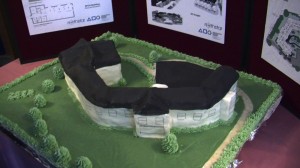 A huge cake of the development (pictured) was distributed by Bedford detachment cadets to the guests and residents at the signing ceremony.