“To look at us, you wouldn’t have thought that by the end of our adventure, twelve out of the thirteen of us would have made a successful summit of the highest peak in North Africa. Led by Captain “Dutch” Holland and Sergeant Simon Hall, the gaggle that would eventually call itself a team consisted of personalities from multiple sub units from 6 Regiment Army Air Corps. 678, 675 and 679 Squadrons were all represented on Exercise Dragon Toubkal, which was the first of its kind for 6 Regiment Army Air Corps, with the participants unwittingly exposing themselves to a real life remote challenge that would exceed all of their expectations.

Our adventures started in the UK, we climbed the Glyders in Snowdonia as pre training, over two training weekends before Captain Holland and Sergeant Hall approved us to come on this High Altitude Remote Trekking 10 day Expedition. After a rope rescue, a phone casualty and a large infestation of mosquitoes in Wales, the seal of approval had been stamped. We were issued final instructions to report to John Howard Barracks in Milton Keynes on Sunday 2 July. Excited and apprehensive we arrived in good time, and after more mountain lessons from Sergeant Hall on all the various subjects required for the Summer Mountain Foundation (SMF) qualification, some pizza and sleep were next. Before we knew it, in the early morning we had managed to clear Luton airport security without causing too many major international incidents and had boarded the three-hour flight to Marrakech.

Once landed in Marrakech, we were greeted by our guides from Tour Dust – who, by the way, provided the most delicious biscuits on the planet! We were then chivvied onto the (air-conditioned!) mini-bus for the commute to Imlil for our first night on Moroccan Berber soil. After being dropped at the bottom of the village of Imlil with all of our bags, we originally tried to persuade the locals that we could carry our own kit to the Gite. We were promptly laughed at. Let’s just say that not even halfway up the unexpected 50m almost-vertical walk we very quickly realised how important our personal mini-herd of mules would end up being!

On our first walking day, we hiked from the comfort of the Imlil Gite at 1,740m to our first campsite in Tiziane, via Aguersioual and Matate. This was our first introduction to the Moroccan terrain, heat and culture, all of which took us by surprise. None of us were expecting to have a freshly cooked, three course lunch on the top of what would be classed as a mountain back home, at 2,219m, in 30° heat. Unfortunately, the change of temperature and diet apparently disagreed with a few of the team, and we had to take an unexpected rest day at the campsite in Tisiane on day two. As we would learn throughout the trip, if your body is feeling the effects, you will know about it sooner rather than later!

Walking days three and four were quiet a struggle for a few of us, with a number people taking it in turns to enter the hurt locker, and not much sleep because mother nature had different plans! 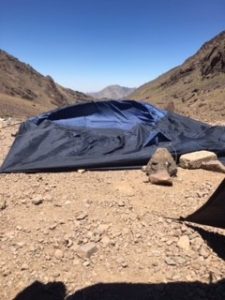 Over the two days we walked From Tiziane to Around, stopping over in Azib Tamsoult (2,250m) for one of the windiest nights of the trip. All of the tents were technically standing in the morning; just some were not quite tent shaped any more. However, as painful and challenging as these two days were, they were not without their memorable moments. Lunch on day three was in one of the most peaceful spots I have ever had the pleasure to visit, next to a stream under a natural canopy of leaves. We also had our first experience of walking along the side of a cliff face on a very narrow mountain path. After this particular 48 hours, we were eternally grateful to our tour guide Ibrahim for putting us up in a small but comfortable hostel in Around (1,800m).

Following an early night and a (much needed) hot shower, we climbed back up to our highest altitude stop yet, at 2,700m. We camped on a plateau about three kilometres from the Les Mouflouns Refuge. I think this was personally my favourite night in the tents, as we met the first Moroccan women to summit Mount Everest in 2017, Bouchra Baibanou, who was an inspiration to us all, and listening to her talk about climbing 6 of the 7 summits was enlightening. Leaving us with her top tips – “be patient” and “it is not a successful summit without a successful descent” we all found new motivation to reach the summit of Toubkal. After finding a deep plunge pool to bathe in and wash the dust out of our kit out, we were ready for the next three days. They would be the most challenging part yet of the Expedition.

After acclimatising to the altitude, most of the team climbed up to 3,600m, leaving a few behind who were still overcoming some illness or mild injury to rest and be strong for the summit attempt. Once the climbers had returned from their day trek (3,684m), we spent the rest of the day making use of the Refuge’s coffee shop, power and basic facilities, getting ready for the 0300 start the next morning. To encourage us on our way, we were in for a treat at dinner, when the Berber support team who had been keeping us fed, watered and sheltered, treated us to some traditional Moroccan music. Their music may not reach the UK top ten any time soon, but a very enjoyable evening was spent getting to know more about the culture we were spending so much time surrounded by.

Summit day came all too soon after, yet another, exceptionally windy night atop the mountain. However, we kept our chins up, put one foot in front of the other and clambered up to the final high altitude ascent of Mount Toubkal, our acclimatisation over the past days and the rest periods had worked well for us all. I can honestly say that I have never been prouder of myself or of a group of people, than I was in the moment we stepped foot on the 4167 meter summit. It was a culmination of effort, emotion and ebullience. Many selfies were taken, the Union Jack and Army Air Corps flags were displayed, and thanks were given for the tour guide who had patiently nurtured us to the very top. 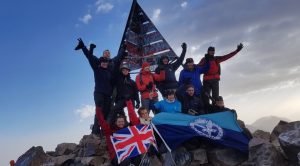 On the descent the mood was lighter, because, even though summiting was not our primary goal – we had set out to build team skills and leadership qualities – those of us that had summited had achieved our own personal goal of reaching the top of a high altitude mountain. We all made it back down to Imlil within twenty-four hours of summiting, just in time for an epic game of cards against humanity whilst sheltering from an electric storm, which raged over a stunning back drop of the Atlas Mountains we had been trekking in just hours before.

Sadly, this was the end of our mountain adventure; we ended the trip on a high, with a stunning meal in Marrakech and a day walking about the city, making yet more memories to take home and look back on for many years to come. All who attended Exercise Dragon Toubkal has taken different lessons away with them, but we all came away with a summer mountain foundation qualification, a sense of achievement and a camera full of memories. It’s with great appreciation that the whole team thank Captain Holland and Sergeant Hall for making this High Altitude Exercise happen, and I can honestly say that none of us will ever forget it. We are also extremely grateful to all the various funds that supported us in this Exped. Without your generosity we would not have developed our leadership and mountain skills, of which some are transferable into our civilian world.” 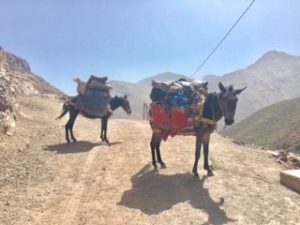