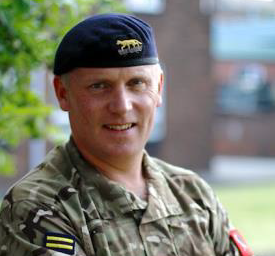 East Anglia RFCA congratulates Lieutenant Colonel Sean Costello TD VR, a member of the East Anglia RFCA Bedfordshire forum, on his appointment to Colonel, which takes effect in October 2020. He was selected for promotion to Colonel Royal Armoured Corps Reserves (CRACR) by a 2* board of Generals in June.

“Almost 30 years in the Army Reserve, and having been a cadet myself, means I’m interested in Reserve and Cadet matters across Bedfordshire,” says Sean, who joined East Anglia RFCA’s Bedfordshire forum as a selected military member in 2018.

Sean is originally from Bedfordshire, attending Bedford School as a young man in the 80’s and joining the school’s Combined Cadet Force (CCF) unit. “My early experience in the cadets inspired me to have a military career. At the time, I intended to join the Royal Tank Regiment, as a Regular, but I joined London OTC as an Officer Cadet instead and had a fantastic time, which inspired me to join the TA.”

Sean is a keen advocate for the cadets, and has been impressed by the cadets in Bedfordshire who he has seen assisting at events in the county. He adds: “When you’re a young cadet, you don’t imagine that one day you could become a Colonel. But you can, and still have a successful civilian career too.”

His experience with the CCF led him to join the London Officer Training Corps. Both his military career as a reservist, and his civilian career, working in marketing & communications for companies like PWC and Deloitte, have taken him all over the world and back.

Sean is currently mobilised to the Covid-19 task force with the Cabinet Office, setting aside his job as SO1 Collective Training Transformation Programme (CTTP) which he started at Andover in February. He also runs a management consultancy specialising in business development and marketing communications, Synapse Global Ltd.

Alongside this, Sean has recently assisted Deputy Commander (Reserves) at 7th Infantry Brigade and HQ East with helping to develop best practice for the recruitment and retention of reservists (Op Fortify). This has led him to work with unit ROSOs and SO2 Engagement across the region and it’s this knowledge and expertise primarily that he brings to the Bedfordshire RFCA forum meetings. Primarily, but not exclusively, since his knowledge and expertise stretches to other areas, not least that he sits on the Bedfordshire committee of the Army Benevolent fund – The Soldiers Charity.

To find out more about the footprint of the Reserves and Cadets in Bedfordshire, click here.