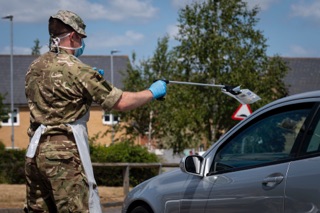 Hertfordshire soldiers are helping to deliver COVID-19 testing in the county as part of the government’s national testing programme.

Reservists from 3 (Hertfordshire and Essex) Company, 3rd Battalion The Royal Anglian Regiment, based at the Hertford Army Reserve Centre, are working at drive-through mobile coronavirus testing sites across East Anglia.

The soldiers have been trained to safely collect swabs at the mobile sites before they are sent for analysis. The mobile facilities can be set up in less than 20 minutes and allow for hundreds of people to be tested each day. 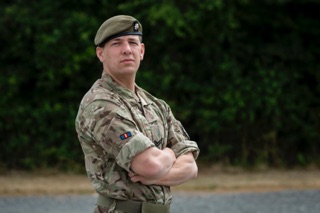 When not in uniform Corporal Chris Vickers, 34 from Cuffley, works in IT. “Coronavirus is something significant for the country and, when there was a request for volunteers, I wanted to do my bit,” he said. “We  didn’t know what we tasks we might be doing, and I did feel a certain degree of nervousness, but we’ve been well-prepared and I’m confident in how we do the testing. We’ve had the whole spectrum of society turn up for testing – young to old, students and business people – and we’ve set out to make them feel comfortable through the process.”

Cpl Vickers, his wife Sammy and their nine-month-old daughter live with his elderly parents and, to prevent any infection risk, he has not seen his family since being mobilised in late April. “It’s been quite a sacrifice for me personally, but I definitely think it’s been worthwhile because we’re helping the whole country,” he said. 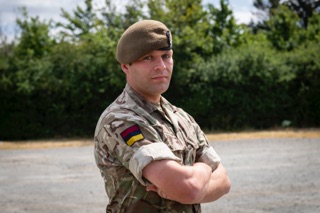 Serving alongside him is Private Steven Adams, a 27-year-old from Royston training to be a paramedic. “It’s good to think that by working on the testing sites we’re helping to stop the virus,” he said. “Our approach is to be friendly and positive, because people are worried about being ill, and they’ve appreciated that.

“Morale among the team has been really good. We’ve got to know each other a lot better and we’ll benefit from that when we go back to our soldiering.”

3 Company commander Major Rhys Little, who lives in St Albans and works as a change manager for Tesco in his civilian life, is managing the five Mobile Testing Units working across East Anglia. He said: “The  Army Reserve is all about adaptability, in moving from a civilian job to an Army Reserve role and then dealing with an every changing military situation. This deployment has typified this with our soldiers quickly stepping up to a unique and unpredictable environment with professionalism and good humour.

“Across the unit we have a diverse range of jobs and experience, but they have all decided to put their civilian career on hold to support the national response during this time of crisis. Putting the needs of others before themselves, this is what it means to be in the Army Reserve.

“We are Hertfordshire’s local infantry regiment and we have received an incredibly warm welcome. People have been really pleased to see local people helping them. It can be really daunting to go for a test, so I think its been nice to have a local reassuring voice.”

Armed Forces Week runs from 22nd to 27th June and it is an opportunity for the public to show their appreciation for the Armed Forces community, which the Reserve Forces are an integral part of. Find out what it’s about and how to take part here in East Anglia.