You are here: Home > Public News > Family owned business gets behind Reserves Day in a big way
◄Back to News

Family owned business gets behind Reserves Day in a big way

CS Hodges and Son is getting behind Reserves Day in a big way this year, by releasing another video into a tribute series that started in 2013.

The series of memorial videos, in which the whole company takes part, commemorates those who have fought for their country and celebrates Reserves Day and Armed Forces Day.

Stan Hodges, MD of CS Hodges & Son Ltd, is the driving force behind the company’s outstanding demonstration of support for Defence People. In November, he accepted an award from the Ministry of Defence in recognition of the business’ actions: the company actively recruits service leavers, contributes to Forces charities such as Hounds For Heroes, and proudly displays the Armed Forces Covenant logo on their fleet of vehicles.

“It really does give all of us at Hodges a genuine sense of pride and purpose to be part of what the Armed Forces Covenant stands for.”

“To be able to show gratitude and appreciation to all those in the Armed Forces that look after Queen & Country fills me with a great sense of patriotism, and to be able to help those same people or their families really is an absolute honour for me. “ 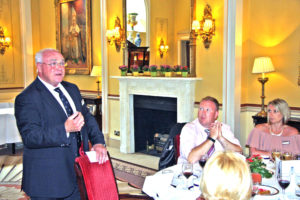 Earlier that year, Stan Hodges had been asked by the RFCA for East Anglia to speak about the Armed Forces Covenant to other employers at a Trooping the Colour networking event at the East India Club last June.

“When I was asked to speak at the lunch held after the Trooping of the Colour I have to say with all sincerity, that it was one of the proudest moments in my entire life,” said Stan,”and I hope that in some way I did encourage others to enrol in this great scheme.”

“They can actually help find you first class, enthusiastic staff that react well to instruction and once the job’s done ask you what you want them to do next.  What price could you put on that? You get top quality, conscientious staff found for you free of charge! Don’t look a gift horse in the mouth, sign up – you won’t look back.  I wished I had sooner.”

“Since putting the Armed Forces Covenant logo on our vans and stationary it has caused clients and suppliers to ask questions about the Armed Forces, hopefully encouraging others to become involved too.” 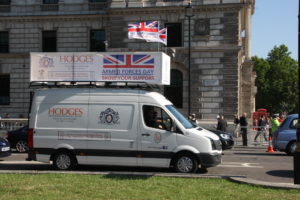 One of the CS Hodges fleet of vans, with permanent Armed Forces Covenant branding, and temporary Armed Forces Day branding, in London for Trooping the Colour.

C S Hodges is a family business that has operated in the field of property maintenance and refurbishment since the 1930s. Based in Hertfordshire, they take immense pride in their work, aim to maintain the highest standards across the business and combine traditional values with the very latest modern thinking, equipment and processes.

The new video will be released on Reserves Day, Wednesday 27th June, and we’ll be visiting the CS Hodges’ website to see what they’ve prepared this year.