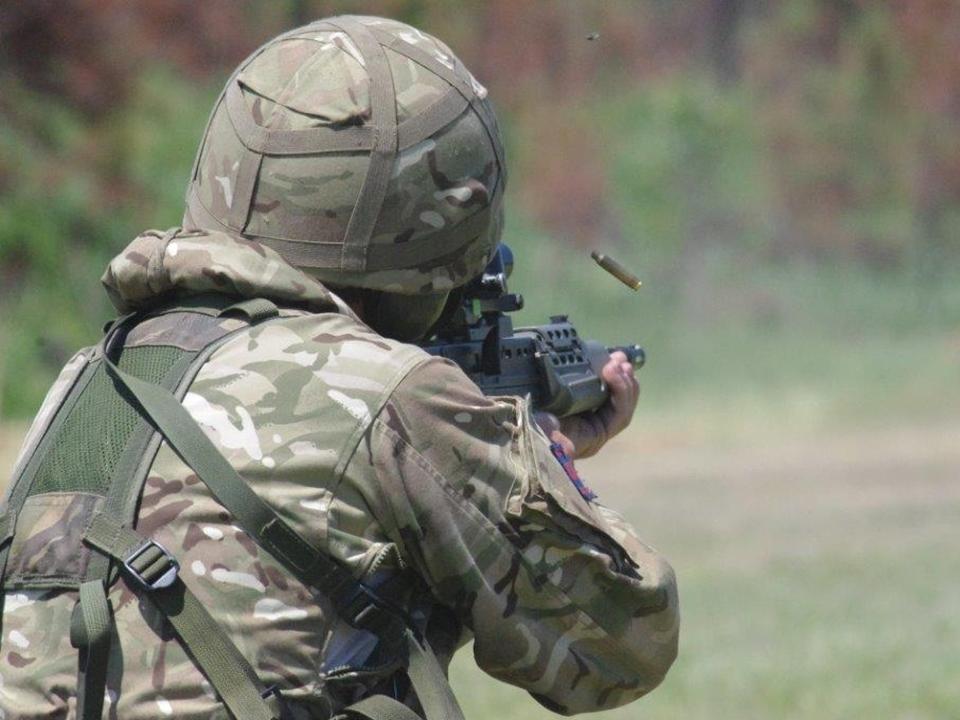 The prestigious, international event was held at the National Guard Marksmanship Training Centre, in Littlerock Arkansas, from 28 April to 12 May, with teams from the UK, Canada, The Netherlands and the USA competing.

Following several training weekends, 12 firers were selected from a long list of those who distinguished themselves at the Reserves Operational Shooting Competition in Bisley in 2013. The team coaching role was undertaken by Staff Sergeant Chris Howard from 151 London Tpt Regt RLC. 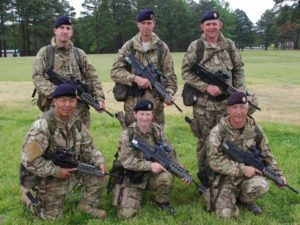 As part of the acclimatisation period, the Team attended a cultural visit to the Governor’s house and Capitol Building in Little Rock, as well as a trip to Fort Smith, before starting to shoot on 1 May.

The Armed Forces Skill at Arms Meeting was initially set up in 1991 as a competition and exchange meeting between the United States National Guard and the Territorial Army where both teams would fire for the Fortuna Trophy. The competition is of the highest standard and contains the most demanding and exciting shooting a soldier will do prior to operations. Due to budget restrictions the US National Guard have not sent a team to Bisley since 2004 but the exchange trip in the USA has carried on and is now in its 23rd year.

The experience…
“The team arrived in Little Rock Arkansas after 26 hours of travel due to flight delays then spent the following day acclimatising for the jetlag and the temperature of 87 degrees and 78% humidity.

The team were informed on arrival that the previous night Little Rock had been ravaged by tornadoes which had led to 15 fatalities when an EF4 tornado ripped apart the town of Mayflower only 5 miles north of Camp Robinson. The National Guard had been mobilised for the relief effort so we were not sure if the competition would take place. During the day of acclimatisation we had arranged for a day of culture and had a tour of the Governor’s Mansion where President Bill Clinton lived for 12 years with his family.

After this we had lunch at the famous Connells restaurant which is known for its large traditional ‘hubcap’ burger.16 ounces of solid beef, which was very aptly named as only one of team actually finished it. We then went on to the Capitol Building modelled on the Government building in Washington DC of the same name.

Day 2 started with a tour of the camp and range complex on Camp Robinson and drawing the weapons to check they had arrived in good order. They were cleaned, checked by the team armourer and resubmitted to the armoury ready for firing.

Day 3, the first day of practice, was spent on range 11 for zeroing rifles at 100m, 200m, 300m, 400m and 500m. Even though we had been practicing for this in the UK prior to AFSAM, a check zero was required as the ambient air temperature, humidity and density can affect the trajectory of the round quite dramatically. Elevations needed to be adjusted but generally the sights had remained intact despite civilian freight! The team finished circa 16.00 after clean-up orders were given for the next day’s shooting practice of rifle and pistol. The team then attended an official function along with the Miller Lite Girls in the evening to meet the other competitors and the US National Guard organisers.

Day 4, the second day of practice, consisted of Close Quarter Battle techniques with rifle and pistol. The new Glock 17 is a very good weapon and easy to use. Before embarking on the trip we had had very little time to practise with them so team members were wary as to how they would perform. The shoots consisted of engaging targets with the rifle in an anti-body armour role with two torso shots followed by a head shot in 4 seconds then six shots on different fig 11’s in 4 seconds! The pistol phase encompassed us shooting round barricades with the left and right hand.

Day 5. Another day of culture was arranged and with the team up early for the three hour drive west to Fort Smith to see one of the original Bordellos. This dated back to the old Wild West days. Fort Smith is well known for ’the hanging judge’ Isaac Parker who was the judge on the western frontier of Arkansas for 21 years until 1896. We inspected the old gallows and jails and museums. We returned to barracks to an early night for the first day of competition the following day.

Day 6. First day of competition was a long distance zero, engaging targets in 45 seconds at 100m, 300m, 400m and 500m. It was a shoot all team members did well in, with two very high scores of 190 and 191 out of 200 and Sgt Gary Wells taking first place. We then went on  for us to shoot the Close Quarter Battle shoot with the rifle in which we again put in some very respectable scores but it was made difficult with a change of the rules of a left and right face manoeuvre. All very interesting as you would then be facing another competitor with a loaded weapon! Although eyebrows were raised we walked away with first place. The last shoot was the pistol barricade. Reasonable scores but the Americans sleep with a pistol so we had stiff competition! Nevertheless we again secured first place with Major Mike Oliver scoring 264 out of 300. 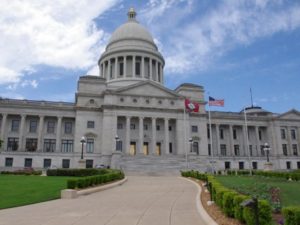 Day 7. With a very early rise at 04.00 we made our way to the ranges for the first shoot at 06.30, the Bianche battle shoot. An interesting competition where it started with a run to the start point where we engaged 5 falling plates each with the Glock pistol. After holstering, two riflemen were then to throw grenades onto a designated target and then engage 6 targets –  including a hostage target with the terrorist as an outline around the hostage. When 30 rounds each had been fired we left that range as a team to run to another range 250 metres away and engage a target 50 metres away with the pistol and then smaller falling plates. All this must be achieved in less than 7 minutes 30 seconds. We were later tested with team shoots to include firing at 500m in very blustery wind conditions which meant reading the wind before each shot. Sometimes as much as a target and a half off for aim off. Very testing as it meant the difference between a hit and a miss. After the final team match of shooting at 500m, 300m, and 200m it was back for a well-earned beer and steak!

Day 8. The day started off very early as usual with first round down the range scheduled for 07.00. The first shoot of the combat rifleman shoot was a straightforward but long range shoot using all disciplines in standing, kneeling, sitting and prone positions from 300m down to 25m to encompass some CQB skills. This was followed up by the anti-body armour pistol shoot which was interesting in that it required two torso shots and a head shot on four different figure 11’s followed by various combinations of six shots on four different targets in four seconds! You have to be quick!! We then went on to another pistol shoot called the ‘Combined Arms Enemy Barricade’, another testing shoot in that it starts with rifle at an advance engaging snap targets between 200m down to 100m. The rifle is slung at 100m and competitors then run hard to the 25m yard-line where a fig 11 which is vertically cut in half is the target! This continues down to 3m where the target is engaged from the hip! We finished the day with a reception in the camp bar for all the international competitors.

Day 9. The fourth day of competition started with the moving target where the teams shoot at three moving targets from 200m in the prone, sitting and standing positions. Standing unsupported at 200m firing at moving target sorts the ‘men from the boys’. Some hilarity was shown when the hand held targets stumbled and bumped their way across the butts. We then moved on to the combat pistol shoot engaging four EIC targets at 30m, 25m, 20m and 15m again demanding some quick shooting of ten rounds on two different targets in 15 seconds with a magazine change in the middle! The final shoot was the ‘Combat Rifle Excellence in Competition’. EIC targets at 400m-25m required fast magazine changes and fast shooting at 25m in another CQB phase. 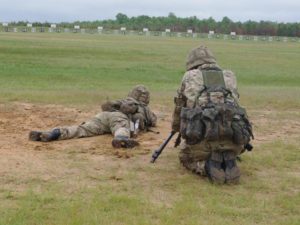 Day 10. The day started with another pistol shoot called the General George Patten shoot. This involved a 250m run before entering the range, then three phases of firing 17 rounds at each distance of 30m, 25m and 20m at three different fig 11’s. Sounds simple but the timings were very quick and a magazine change had to be made in the middle. We moved on to a falling plate competition similar to the shoot at Bisley except we each shot it once and the placings were done on times. The times of our three teams spread across 27, 28 and 29 seconds. The final shoot of the day was a test of your shooting limits. Three targets of various sizes 8″, 5″ and 3″ at 200m scoring 15, 10 and 5 points and it was a simple test of pure marksmanship.

Day 11. The final day’s competition took place with the first shoot being the prized International shoot match. This match is shot only by international teams for the overall championship “The Lexington Green Trophy”. This comprised of shoots at 100m, 200m, 300m and 500m of various disciplines in either snap or deliberate marksmanship. The final phase of the exercise was a rundown from 500m-100m, engaging targets with two rounds at every 100m intervals at different positions. The Army Reserve team took first place with the closest team, The US All Guard Team, being some 79 points behind. The last competition of the day, and indeed the meeting, was the Conway Cup consisting of a CQB element mixing rifle disciplines with pistol. The US All Guard Team put in a fantastic performance and beat the Army Reserve team by 100 points thus taking the overall team championships.

At the end of the day the prize giving took place where the British Army Reserve teams were very handsomely represented.

The big clean-up commenced with handing back all equipment followed closely by cleaning all weapons and packing them for civilian freight back to England. Once completed we were then in our own time for a day until the scheduled return flight from Little Rock to Houston and on to Heathrow.”

If you would like to join the Reserve Forces, visit our website for more information and to find your nearest unit.