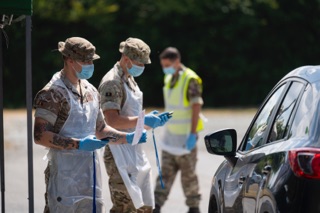 Essex soldiers are helping to deliver COVID-19 testing in the county as part of the government’s national testing programme.

Reservists from 3 (Hertfordshire and Essex) Company, 3rd Battalion The Royal Anglian Regiment, based at the Chelmsford Army Reserve Centre, are working at drive-through mobile coronavirus testing sites across East Anglia.

The soldiers have been trained to safely collect swabs at the mobile sites before they are sent for analysis. The mobile facilities can be set up in less than 20 minutes and allow for hundreds of people to be tested each day. 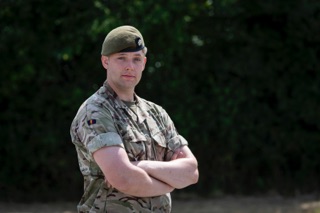 When not in uniform Private Jason Franklin, 28 from Colchester, works for his family’s sewing machine business. “Business has slowed down considerably, so rather than sit at home I volunteered to do my bit,” he said. “Some people are nervous about being sick when they come for testing and can get flustered. It’s rewarding to use customer service skills from my civilian job to help people do the test. I joined the Reserves out of patriotism and to have something different in my life. I never anticipated that doing this would be the ‘something different’, but I’m proud to be helping my local community.” 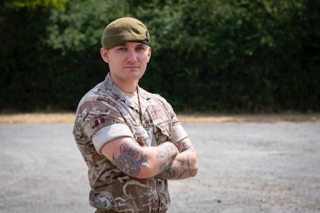 Serving alongside him is Private Luke Friar, a 25-year-old plant engineer from Billericay. He spent four years in the Army before leaving in 2017 for a fresh challenge, joining the Reserves to keep up his military skills and the camaraderie of soldiering. It’s been really a good experience,” he said. “A few people have been surprised to see soldiers at testing centres and you have to show a bit of personality to get some of them through the process. People have thanked us for what we’re doing. We’re living and working together and it’s really helped build a team spirit among the unit.” 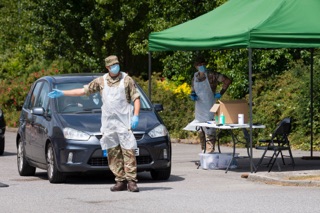 3 Company commander Major Rhys Little, who lives in St Albans and works as a change manager for Tesco in his civilian life, is managing the five Mobile Testing Units working across East Anglia. He said: “The  Army Reserve is all about adaptability, in moving from a civilian job to an Army Reserve role and then dealing with an every changing military situation. This deployment has typified this with our soldiers quickly stepping up to a unique and unpredictable environment with professionalism and good humour.

“Across the unit we have a diverse range of jobs and experience, but they have all decided to put their civilian career on hold to support the national response during this time of crisis. Putting the needs of others before themselves, this is what it means to be in the Army Reserve.

“We are Essex’s local infantry regiment and we have received an incredibly warm welcome. People have been really pleased to see local people helping them. It can be really daunting to go for a test, so I think  its been nice to have a local reassuring voice.”

Armed Forces Week runs from 22nd to 27th June and it is an opportunity for the public to show their appreciation for the Armed Forces community, which the Reserve Forces are an integral part of. Find out what it’s about and how to take part here in East Anglia.