You are here: Home > Public News > Essex Reservist learns to drive in the Royal Logistics Corps
◄Back to News

Essex Reservist learns to drive in the Royal Logistics Corps

An Army Reservist in Warley, Essex, passed his theory and driving test enabling him to drive a car.

But Gareth Westrip has his sights set on bigger things. He wants to drive big trucks. 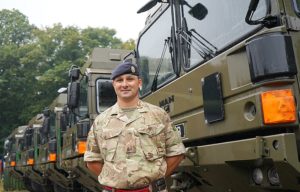 Gareth started his Reserve career as an infantry soldier, but he transferred to 124 Transport Squadron Royal Logistics Corps (RLC) in order to develop his skills further as a driver.

Gareth said: “Obtaining a driving licence not only started my driving career in the Reserves, I was able to transfer the skills into the workplace where I am now employed as a civilian driver.” 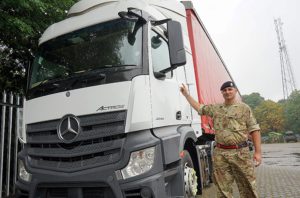 During this time, he will learn how to maintain vehicles, restrain loads and develop cross country driving skills.

Gareth is well on his way to achieving his goal of passing his LGV Cat C+E licence, which will allow him to drive large articulated LGV vehicles.