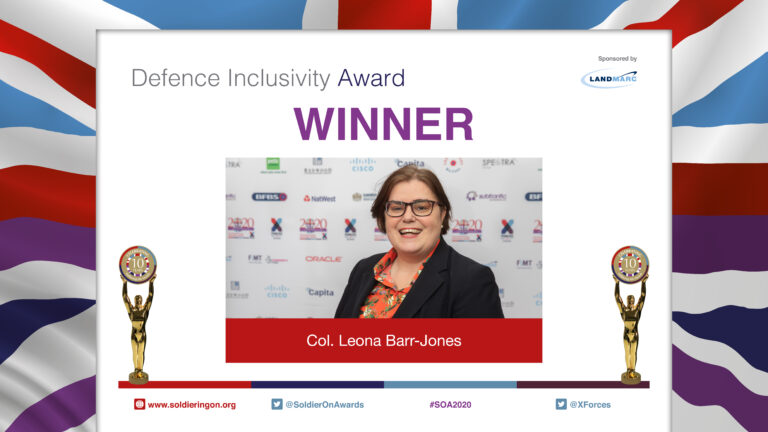 Colonel Leona Barr-Jones is this year’s winner of the Soldiering On Defence Inclusivity Award, for her contribution in the Army Cadet Force.

Leona is the IoD East of England Ambassador for Diversity, Inclusion and the Armed Forces and was winner of the National  IoD Inclusive Director of the Year, and delivered the opening address at its Open House Inclusivity Conference at Cambridge.

Leona is the COO of Focus 7, a Hertfordshire-based, brand-led business growth and marketing agency. Leona graduated from the Royal Military Academy Sandhurst (RMAS) in 1991 and held a number of commands around the world and in London before leaving the Regular Army in 2011, re-joining as a reservist. She holds post graduate Diplomas in Strategic Direction, Leadership and Management from Cranfield University, King’s College London and Manchester Business School (MBS). She is a Fellow of the Institute of Directors (FIoD), the Chartered Management Institute (FCMI) and the Institute of Leadership and Management (FInstLM). She is a Graduate Member of the City and Guilds Institute (MCGI). She is a Freeman of the City of London and Liveryman of the Worshipful Company of Stationers and Newspaper Makers.

The Soldiering On Awards (SOA) recognise the outstanding achievements of those who have served their country, and the diverse people and groups who work together in support of the Armed Forces Community.

The Defence Inclusivity Award recognises the commitment and achievements of individuals and organisations in achieving greater diversity and inclusion throughout the Armed Forces Community.

Colonel Barr-Jones said: “Thank you so much to Landmarc, the sponsors and to the Soldiering On Awards. Diversity and Inclusion is really important to all of us who are involved in the Armed Forces community and it is an honour to represent all the amazing work being carried out across Defence, in particular within our Cadet Forces, with winning this award.”

Lt Colonel Ren Kapur MBE is the CEO of X-Forces Enterprise and the Co-Chair of the Soldiering On Awards. Ren said: “We are thrilled to congratulate these inspirational winners and it was wonderful to gather everyone together and celebrate our amazing community in these challenging times.”

Ren added: “This virtual event wasn’t quite what we had envisioned but we want to thank all of the judges and particularly the sponsors for continuing to support the Soldiering On Community; making sure that everyone’s experience this year is as special as we can possibly make it.”

Further Award events are taking place on 1st October, 8th October and 15th October between 1700hours and 1800hrs – See the Soldiering On website for details of award categories.

Image courtesy of Soldiering On.