You are here: Home > Public News > Cadet instructor appointed as Member of the Order of St John
◄Back to News

Cadet instructor appointed as Member of the Order of St John 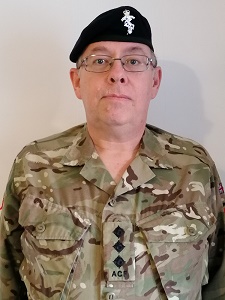 A cadet instructor with Suffolk ACF has become a Member of the Order of St John after 30 years of volunteering with St John Ambulance.

Captain Ian Partridge MStJ has trained over 600 adult instructors and cadets since he joined the Army Cadet Force in 2004. He said: “What I’m most proud of though, is of the many cadets and adults who I’ve trained who have gone on to use their skills to help someone.”

He is currently the Medical Support Officer for Suffolk ACF, giving advice to the County ACF Commandant on first aid policy, first aid governance and medical planning. Prior to that, he had been the Suffolk ACF First Aid Training Officer for 8 years.

Ian had joined the British Army at 16 and served as a military clerk until 1991, when he joined Royal Mail. At that time, Royal Mail was a special centre of St John Ambulance, and he took up the offer of becoming trained in First Aid at Work. Many opportunities arose for him to practise his first aid skills during his 15 year tenure there, including giving first aid for strokes, heart attacks, broken ankles, spinal and head injuries.

After three years, Ian was able to apply to become a first aid trainer and since 1994, he has been training others to administer first aid as well. When his daughter joined the Army Cadets in 2004, her detachment commander learned of Ian’s fist aid skills and persuaded him to join as an adult instructor.

Ian undertook the training to become an adult instructor in the Suffolk Army Cadets and progressed to detachment commander with the Ipswich Grenadier Guards detachment for 4.5 years, then detachment commander for a year at the Ipswich Priory Heath detachment. Then, he took over as Duke of Edinburgh and First Aid advisor for C Company. Then, he accepted the role of First Aid Training officer for Suffolk ACF. Within this role, he delivered, and was responsible for, all aspects of First Aid to over 600 cadets and CFAVs, whilst advising the County hierarchy on medical matters. Ian is currently the Medical Support Officer for Suffolk ACF, so he’s involved with the youth organisation’s first aid policy, governance and medical planning.

What’s more, Ian is a trained mental health first aider. Through the RFCA network, Ian accessed training last year. He said: “Mental health isn’t like physical first aid, it’s about being able to recognise signs of mental ill health and signposting people towards the right mental health support.” Major Keith Humphrey, Cadet Executive Officer of Suffolk ACF said: “As the mental health of all SACF CFAVs and cadets has emerged as a key factor to the success of the County; Ian is at the very forefront of efforts to address both these issues.”

While he was volunteering as a detachment commander, in 2011, a new opportunity arose for Ian. East Anglia RFCA were looking for a County Administration Officer for Suffolk ACF. It was a perfect fit and he remembers his wife Avril being very supportive of his choice to leave Royal Mail to immerse himself fully into Suffolk ACF. Ian added: “My wife Avril has been very supportive of my volunteering in the Army Cadets, and she sees how much I enjoy it. It’s helped my personal development and it’s giving back to the community. As a shift worker, she can’t volunteer herself, and she can see the benefits the Army Cadets has brought to our family.”

His appointment as a Member of the Order of St John was announced in the London Gazette, and his story, written by the then Suffolk ACF Public Relations Officer Rob Catton, was featured in the East Anglia Daily Times, the Ipswich Star and the Suffolk Army Cadets website. When possible, an investiture will be held where he will receive his medal.  The Order of St John is a British Royal Order of Chivalry, first constituted in 1888 by Royal Charter from Queen Victoria. The appointment offers him an opprtuntiy to network with members from all over the world, including Canada, New Zealand, Malta and Singapore.

Ian said he’s so proud of all the cadets and adult instructors who have gone on to save lives. For anyone thinking about learning first aid, Ian has this advice:  “You shouldn’t have to rely on other people to administer first aid because you can do it. Even if you don’t like the sight of blood, if you know what to do, and can tell someone what to do, you could save someone’s life. Go for it!”

Now more than ever, St John Ambulance is relying on donations from the general public to help them continue their vital work in the community. Visit sja.org.uk to make a donation to teach people life saving first aid, and to ensure volunteers are on hand to provide first aid where they’re needed most.