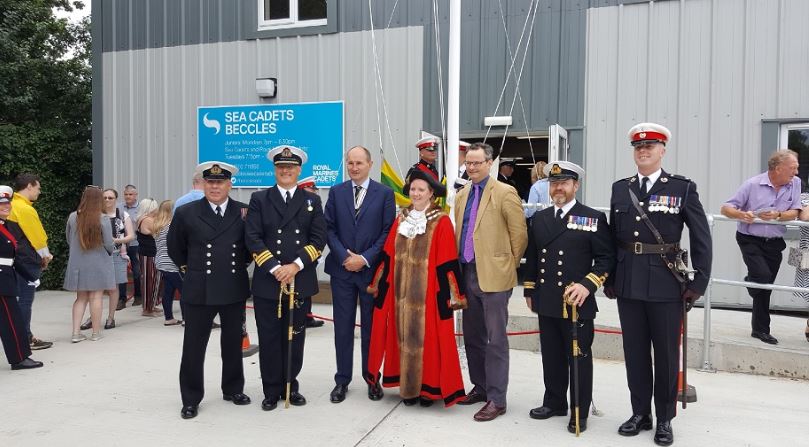 In the biggest Armed Forces Community Covenant project in Suffolk to date, the Beccles Sea Cadets and Royal Marines Cadets opened their new Headquarters and Training Centre in front of their whole community.

In 2013, the Beccles Sea Cadet unit operated out of wooden huts and a two storey porta-cabin in a small boat yard. The space didn’t meet the unit’s needs and was limiting their growth opportunities. Despite this, the unit had a strong community consisting of a healthy number of cadets, 40 Sea Cadets and 15 Royal Marine Cadets and 34 adult instructors.

Beccles Sea Cadets were successful in applying for a £69,900 grant in November 2014 towards a new build project from the Armed Forces Community Covenant Fund.

This project was supported by the Suffolk Armed Forces Covenant Board with officers from Suffolk County Council helping to ensure the project met the key outcomes and expectations of the fund.  This spurred on the fundraising strategy and the project attracted nearly £500,000 in grants from other funding sources.

The project broke ground in February 2017, which was covered by the Lowestoft Journal, the Beccles and Bungay Journal and the Eastern Daily Press.

William Kendall DL represented the lieutenancy at the opening ceremony on 14th July 2019.  Watch the video from the event and take a virtual tour of the new building.

The new building will support the development and training of Sea Cadets from Beccles and area and also become a regional training amenity for other uniformed youth groups.  It will be available for the local civil community to use whether that be for training and development or community activities/services.