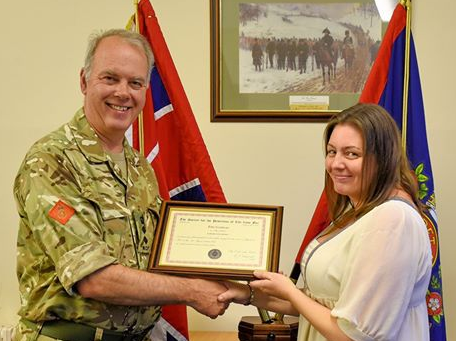 Sarah Jones has been presented with a certificate from The Society for the Protection of Life from Fire.

Commandant of the Bedfordshire and Hertfordshire Army Cadet Force, Colonel Andrew Every, presented Sarah with a framed certificate testifying to ‘distinguished conduct while engaged in the rescue of life from fire’.

On 4 October 2018, Sarah, who was an instructor in 1 Company Beds & Herts ACF, was at home when she heard several loud bangs. Going outside, she saw two men trying to get into the flat next door using a sledgehammer. When they got into the flat, a large amount of black/grey smoke came out, along with a smell of burning plastic. The two men carried a female out of the flat.
Sarah, believing the 3 year old child who lives there was still inside, entered the flat which was full of smoke. She came out when the bystanders told her there was no one else in the flat.

She began administering first aid to the casualty who was unconscious but breathing, putting her into the recovery position with the aid of the two bystanders. While checking the casualty, she noticed bruising and swelling beginning to form on her forehead and temple, and began holding her head steady fearing a head/neck injury.
While this was happening, the casualty’s mother arrived and Sarah instructed her to dial 999. The mother did not speak much English so gave to phone to Sarah so she could brief the emergency services, while still supporting the casualty’s head.

When the fire brigade arrived, they checked the casualty’s neck, put her on oxygen and sat her upright. While this was happening, the casualty’s mother began to have an asthma attack. Sarah made sure she was comfortable and checked if she had her inhaler, but she did not have the correct one. Both the casualty and her mother were then looked after by the ambulance crew who arrived shortly afterwards.

The casualty did not want to go to hospital, but Sarah persuaded her to go where she stayed for 5 days for treatment and assessment.

Commandant Col.Andrew Every said “This is a very special and rare award for Sarah and very well deserved. Once again the Army Cadets and their training achievements have made me very proud. “