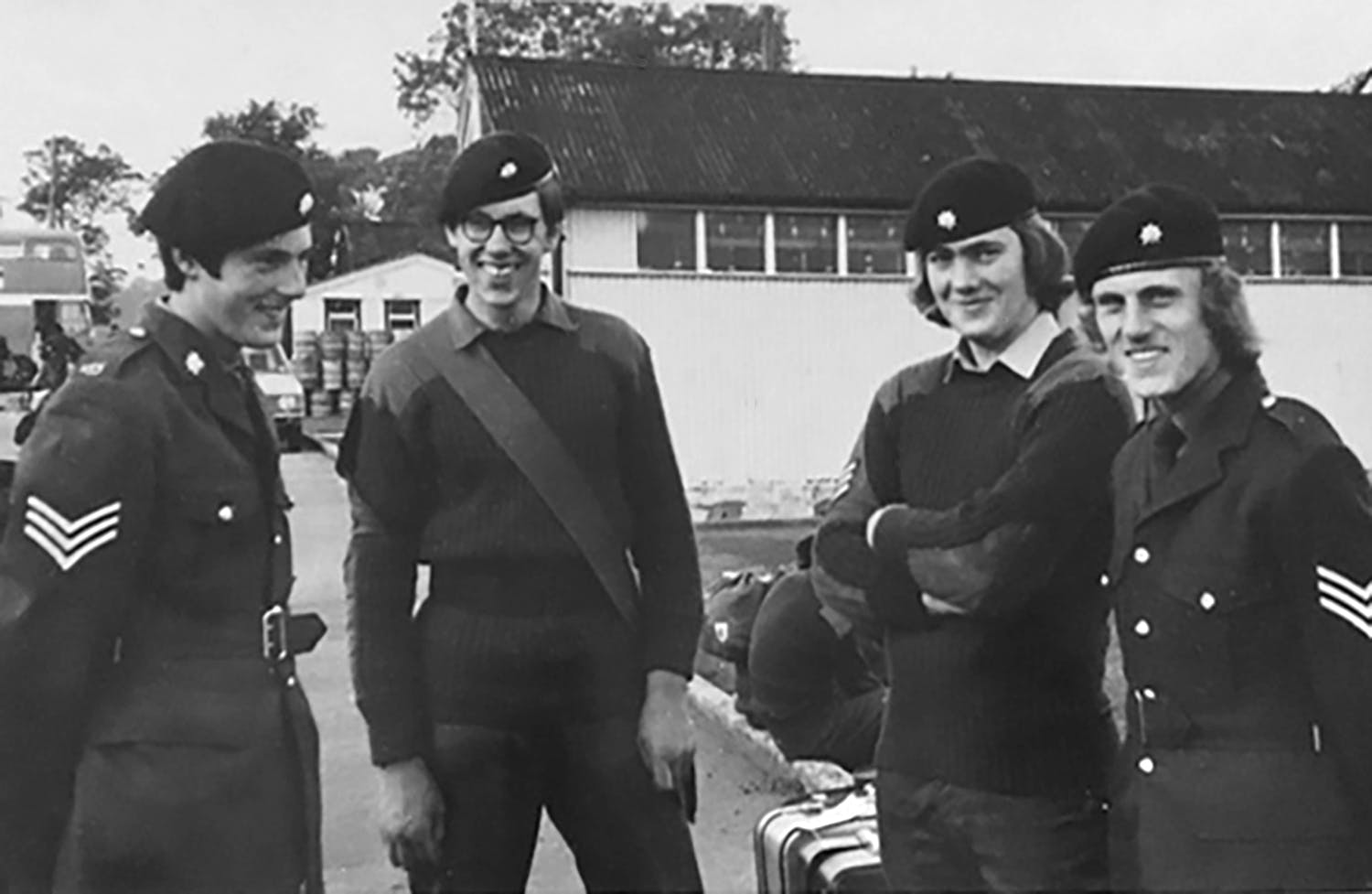 His first Annual Camp was at Penhale Camp in Cornwall. He became part of 6 (C)Battalion Shooting Team, and using .303” rifles, his team won The Griffin Trophy County Shield. He attended the 3rd UKLF leadership course and finished his time as a cadet with the rank of Colour Sergeant. He said “it was character building, and we had a lot of fun. I remember going over the obstacle course at STANTA, falling in the mud! There were no restrictions, if you fell once you didn’t fall a second time!”

In 1974 he became an adult volunteer, received a commission five years later and became Detachment Commander at Newmarket. He stayed there for seven years, expanding the detachment from only six cadets to forty, with eleven of them 4 star complete, a county record to this day. This contributed to the detachment being awarded The Bishop of Ely Shield for best detachment in 1986. That same year, Trevor became Company Training Officer for 6 (C) Bn. In a re-organisation of the County in 1993 6 Bn became No. 3 Company, and shortly afterwards Trevor became its OC. A few years later he took the position of County Training Officer, followed by his first spell as Deputy Commandant in 1999. In 2001 he took a short break from the ACF due to the demanding schedule of his day job.

Newspaper picture showing Trevor (back middle) as DC of Newmarket, with cadets who have received their badges as members of The Royal British Legion Youth Attachment, 1982

In his civilian life, Trevor has worked as a carpenter. He served an apprenticeship at Kerridge in Cambridge during the 1970s, before becoming self-employed and later working for Sindall Joinery in Sawston. Here he became Contracts Manager, being the link between the workshop and building sites in London, for which he had to visit and supervise the joinery work being completed on site. He worked on many high-profile buildings, including The Foreign Office, The Department of Health and Social Security, Church House, home of The General Synod, Canary Wharf and The New British Library.

Changes to his work schedule soon allowed him to re-join the ACF, once again becoming OC 3 Coy, followed by a further spell of 7 years as CTO. Trevor represented 7 Brigade at the Training Working Group (TWG) which meets to discuss National Training Policy. He re-wrote the policy wording for the Junior Cadet Instructors Cadre (JCIC) to align with CFIT and represented Cambridgeshire on The RFCA Estates Committee for 15 years. He became Deputy Commandant for the second time in 2017.

Looking back on his time with Cambs ACF, he has many great memories, but particularly recalls the excitement of getting two Chinook helicopters to annual camp at St Martin’s Plain in 2014. They flew cadets out to their training exercise, and returned cadets who had finished theirs back to camp, an experience which he said everyone involved would never forget. He is also proud of the changes and improvements made to adult training, including the introduction of the highly successful Familiarisation and Assessment Course and Adult Induction.

He is expecting to become a grandfather shortly, and hugely looking forward to spending more time with his family.

The Commandant, Colonel Adam Fraser-Hitchen, paid tribute to Lt Col Cox’s service noting that ‘Trevor is the very epitome of the ACF volunteer; dedicated, knowledgeable and selfless. His decades of service, from cadet to senior officer have benefited hundreds of young people allowing them to realise their early potential in life. Cambs ACF will miss him immeasurably’.