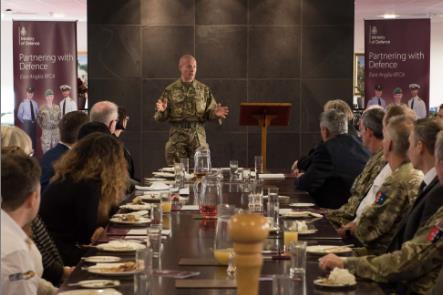 With presentations, displays and an opportunity to network, the local business representatives gained an exclusive insight into the local military community, the Armed Forces Covenant, the Ministry of Defence’s Employer Recognition Scheme, and the benefits of employing a reservist, cadet instructor, service leaver or military spouse.

The Essex employers were invited to meet the soldiers who live and work in the county during the event, and handle some of the equipment. 7th Parachute Regiment Royal Horse Artillery, showed off a 105mm light gun and parachute equipment. The Brigade is the British Army’s airborne rapid reaction force, equipped to deploy by parachute, helicopter and air-landing. A highlight for the group was posing for a photo in front of the iconic WW2 Dakota aircraft, used in parachute operations such as D-Day and the Battle of Arnhem. 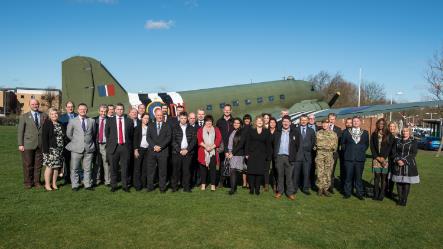 Lieutenant Colonel Ciaran Griffin OBE, Commander of Colchester Garrison, said: “This has been an excellent opportunity to engage with the Essex business community to improve their understanding of the military and build mutually- beneficial relations between us.”

East Anglia RFCA County Employer Engagement Chairman Iain Finch challenged the 75 guests to consider the wide range of benefits that veterans, Reservists and cadet instructors bring to a business. He invited them to make public any positive steps they make within their business to support Defence personnel, by signing the Armed Forces Covenant and advocating their support to their network of suppliers and customers.

Kristina Carrington, Regional Employer Engagement Director on behalf of the Ministry of Defence, said: “I hope today’s guests have been inspired to pledge their support under the Armed Forces Covenant.” 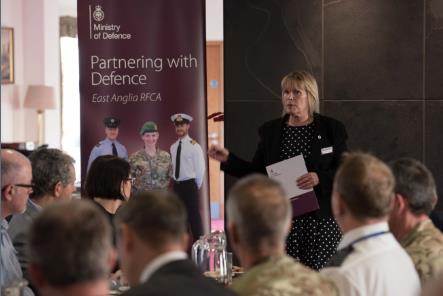 As many as 1,500 businesses and organisations have signed the pledge since its inception in 2014. The companies’ pledges are held by the Ministry of Defence and are publicly available to download from armedforcescovenant.gov.uk. East Anglia RFCA provides support and advice to employers on Defence-related business matters, as well as maintaining safe and compliant buildings for Reserve Forces and Cadets in the region, on behalf of the Ministry of Defence. 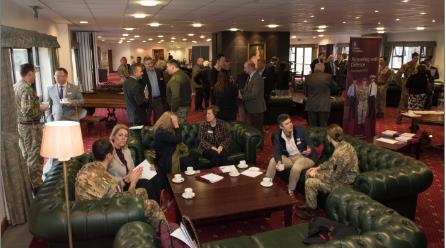 East Anglia RFCA run regular events in similarly exciting locations in Bedfordshire, Hertfordshire, Cambridgeshire, Essex, Norfolk and Suffolk. These are free events for business representatives who are interested in developing a mutually supportive relationship with the military communities. Information about upcoming events can be found on their website earfca.org.uk or by phoning the East Anglia RFCA on 01245 244 800.