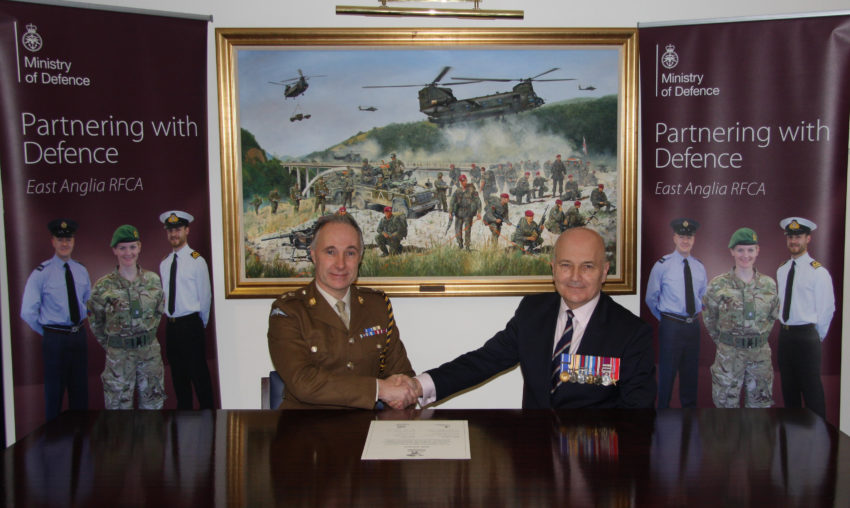 On Thursday 24th January, Gepp Solicitors, one of the oldest solicitor firms in Essex, signed the Armed Forces Covenant at a ceremony attended by CEO Mike Cubbin and Lieutenant Colonel Stephen Caldwell, Commander of Colchester Garrison.

The Armed Forces Covenant is a promise from the nation ensuring that those who serve or who have served in the Armed Forces, and their families, are treated fairly. To date over 3,000 organisations have signed the Covenant, including businesses and charities.

CEO of Gepp Solicitors, Mike Cubbin (who retired from the Army Air Corps as a Lt Col in January 2017) said:  “We are really excited to be signing the Armed Forces Covenant; we have a long history of supporting members of the Navy, Army and Royal Air Force through the legal defence work of our Senior Partner, Roger Brice, but so many of our staff have connections to the military that it made sense to formalise our commitment to the Armed Forces Community.”

“The firm made a bold decision in 2017 to employ me as their CEO straight from the Army, which reflects their willingness to support Veterans and recognise the broad range of skills that we bring to the civilian workplace.  We are keen to employ Reservists, Service Spouses and other Veterans and hope that our signing will encourage the wider Armed Forces community to consider applying for jobs in our firm.”

Regional Employer Engagement Director, Kristina Carrington added: “I’m delighted to welcome Gepp Solicitors to the growing community of employers who have signed the Armed Forces Covenant and look forward to working with them on their Partnering with Defence journey.”

Gepp Solicitors, with offices in Chelmsford and Colchester, celebrated their 250th anniversary in 2018 and throughout their history they have had a close linkage with the military.  Thomas Frost Gepp, one of the founding partners, served with the local militia, and was a Captain of the Loyal Chelmsford Volunteers that were formed in 1798 as the threat of invasion from the French intensified.  During WW1 a Gepp served with the Essex Yeomanry in France from November 1916 to November 1918.  In WW2 a future partner of the firm was on the beaches of Normandy on D- Day and gained the Belgian Croix de Guerre and the Chevalier of the Order of Leopold.

The firm, which employs 100 staff, provides a traditional range of high street legal services such as Conveyancing, Wills, Trusts and Probate, Matrimonial (Family), Dispute Resolution, Employment and have a very experienced team of Criminal Defence lawyers.  Gepp Solicitors also has a Commercial department, which provides a number of legal services for business but specialises in supporting rural businesses.  The firm is a specialist in Military Law, having been a founder member of the Forces Law network of firms who provide legal defence for serving and retired military personnel.  Senior Partner, Roger Brice has over 20 years’ experience defending Service Personnel at Court Martials and has represented former Services personnel at the Public Inquiry held by Sir George Newman into civilian deaths in Iraq.

CEO Mike Cubbin retired from the Army in January 2017 and the firm recruited him as a result of using the Career Transition Partnership‘s job site.  The firm recognises that serving and retired members of the Armed Forces bring a unique set of skills and experience that will benefit the firm.  Whilst many of their posts require legal qualifications and experience, there are others that do not and they are keen to attract Reservists, Service Spouses and Veterans to apply for those posts.  By signing the Armed Forces Covenant, Gepp Solicitors aim to foster those relationships.